With the vote count at 100%, figures show the opposition Unity Party winning a plurality of 9 out of 20 seats in Parliament, two seats short of a majority, while the ruling National Artists’ Guild plummets from controlling 1/2 of Parliament to 6 out of 20 seats. The Left Alliance, running for the first time in two years, comes in third with 4 seats. An additional seat has been reserved for the Bishop of Alios, who will represent the Pahunist state church in Parliament in accordance with the Law of Pahunist Representation passed last March.

All three party leaders retain their respective seats. The results point to a mildly fragmented Parliament that will need a coalition to form government. Coalition talks are underway at this moment, and Enkâkourak Virny has insisted an agreement will have been reached well before October 1, when the new Parliament assumes power.

The results reflect well what had been predicted by various polls up until now: the Conservatives of Unity have grown considerably since the last election, a phenomenon mostly explained by the charisma of Unity leader Andrew Blackhorse. The Leftists surprised by winning over 20% of the vote, a number that had not been reached by the green socialist party in polls.

In Alios’ regional election, Guild candidate Étienne Boulin has narrowly won a second term in office as Chief of Government with 52% of the vote over Unity candidate and former judge Hardanê Ban Bagor, who stepped down from her seat in the Tribunal of Sabia and Verona in August causing potential political turmoil.

It is unclear what sort of government will take over on October 1, but most analysts point to a left-wing coalition between the National Artists’ Guild and the Left Alliance, headed by current Enkâkourak Shounn Virny. Were this to happen, Virny would become the first Enkâkourak to win two consecutive elections. The Guild leader has already broken records as the longest-serving Enkâkourak in Sabioveronese history. 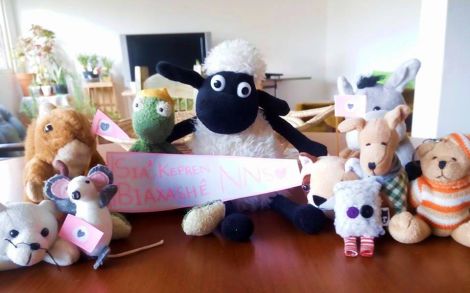 Enkâkourak Shounn Virny and his campaign team at the NNS bunker in Poméxelos shortly after the polls closed at 4 pm.

Lots of positive energy and general happiness were reported by the citizens of the Southern territories throughout the day, as the election unfolded over the course of a warm and sunny Sunday.

One response to “Decision 2016: Conservatives fall short of majority”