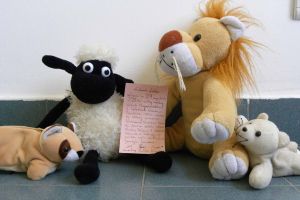 The city of Kotavari witnessed a historic moment yesterday as Enkâkourak Virny, in his capacity as Chief Artist of the National Artists’ Guild, and representatives of the Left Alliance and the Convergence and Amity party have signed a “treaty of mutual representation”, which gives the last two political organizations an indirect “form of representation” in the Sabioveronese Parliament.

The treaty, which has been dubbed “Treaty of Kotavari”, intends to formalize the membership of the NNS in the Valtirian National Party, the coalition of left-wing parties formed earlier this year to present an opposition to Bertrand Rivière’s Unity Party-led government. After the dissolution of the Courts in July 2015, the coalition feel dormant as the R and A parties both declined in members with the foundation of the Guild.

The treaty was signed by Virny, Léon Galieri (who was authorized by Left Alliance leader Petyr Cohen to represent the R party) and Étienne Boulin (who was authorized by Convergence and Amity leader Saleon Pazar to represent the A party). All three representatives now belong to the Guild, but both Galieri and Boulin have been in important offices in their respective represented parties before. Galieri was one of the Left Alliance’s original founders and its leader until Haronos.

The National Artists’ Guild now has, by virtue of the treaty, the obligation to abide to the opinions of the other VDM member parties in matters of the state, and is to “protect the ideals of the VDM in the Parliament.” On the other hand, R and A are to do the same for the NNS in the Northern Territories, where they are present and have representation. This is seen as an indirect form of mutual representation between the Southern Territories (and the national Parliament) and the Northern Territories (and the regional Legislative Assemblies).

This is the second time in Sabioveronese history that political parties have signed an agreement of some sort since the signature of the Karasal Treaty in 2012 between the Socialist Party and the Unity Party.

One response to “NNS and VDM sign “treaty of mutual representation””